Everybody has their favorite LeRoi Brothers story. There was the time in the early 1980s when the LeRois were playing The Spot, a great little bar in Wichita Kansas. The LeRois were a three-piece outfit then, just two guitars and a drummer but they could definitely kick out the volume, a fact that did not escape the local police who raided the place after a noise complaint. The first words out of the cop’s mouth after he entered the bar were: “My gawd there’s only three of ’em!” 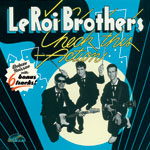 This album captures the best of those early LeRoi Brothers days, times that devout fans still get in a lather over. To save money the album was recorded between 11 PM and 5AM when the studio offered cheap rates. Perhaps the lateness of the hour contributed to those wonderful rough edges that still jump out of the tracks today. No gimmicks, just real rock’n’roll. Producer Vince McGarry just let the boys play. The original LeRois – Mike Buck, Steve Doerr and Don Leady—were backed by guest bass player Keith Ferguson except on the cut “Are You With Me Baby” which was done sans bass.

This record made many people’s Top Ten List after it came out in 1983. Turn up the volume, put the beer on ice and you’ll discover the reason why!

Originally released solely as an LP, with some copies sporting the Amazing logo, Check This Action was later licensed and released on CD by Rounder Records in 1994. That release had a redesigned cover and altered song order. With this first Jungle CD issue, we have proudly restored the original and iconic cover art by renowned Austin artist Guy Juke and returned the original song order, making the old new again!

This 2017 Deluxe Reissue (JR 1006) adds to the mania by including Six Bonus Tracks, four taken from the legendary Moon Twist EP that features Alex Napier on bass, was originally released on Amazing Records in 1981. The two additional outtakes were taken from the Check This Action 1983 sessions.