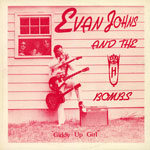 Jungle Records is delighted to announce the re-release of Evan Johns and the H-Bombs legendary four song EP Giddy Up Girl (Jungle JR4002).  Originally released as a 10” vinyl EP, the long out of print disc is available as a download from CD Baby or your favorite download /streaming service.

Recorded on September 9th 1980 up in Evans old stomping grounds of Virginia, it features these original tracks – Giddy Up Girl, Don’t Be Late, Mind of My Own and Pain of Love – with Evan Johns on guitar and vocals, Keith Johns on drums, Michael Maye on bass and organ and Don Oehser on guitar.

Rockaround means Evan can toss a guitar break in ”Mind of My Own” that sounds like one of the Yardbirds  got epilepsy; or add Tex-Mex organ fills to “Pain of Love;” or drive ”Giddy Up Girl” through Echo Canyon; or even let the H-Bombs go Memphis rockabilly on “Don’t Be Late.” It’s more fun to trash the blues than to worship them, and besides, what are the choices when you sound like a redneck frog with ‘ too tight jeans and laryngitis.

Whenever Mr. Johns even gets a little serious, his guitar starts to explode or the H-Bombs drop on him, sounding at once half-crazed, urgent and at all loose ends. These songs feature Evan’s two guitar styles -broken glass and rusty nail. They both cut and wound.

This whole 10″ sounds edgy, jacked up, and high voltage enough to melt down. If that sounds as good to you as to me, don’t be late. — Joseph Sasfy, Doctor of Rockology 1980 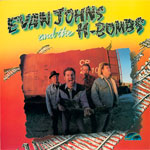 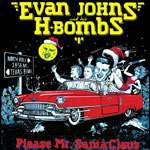